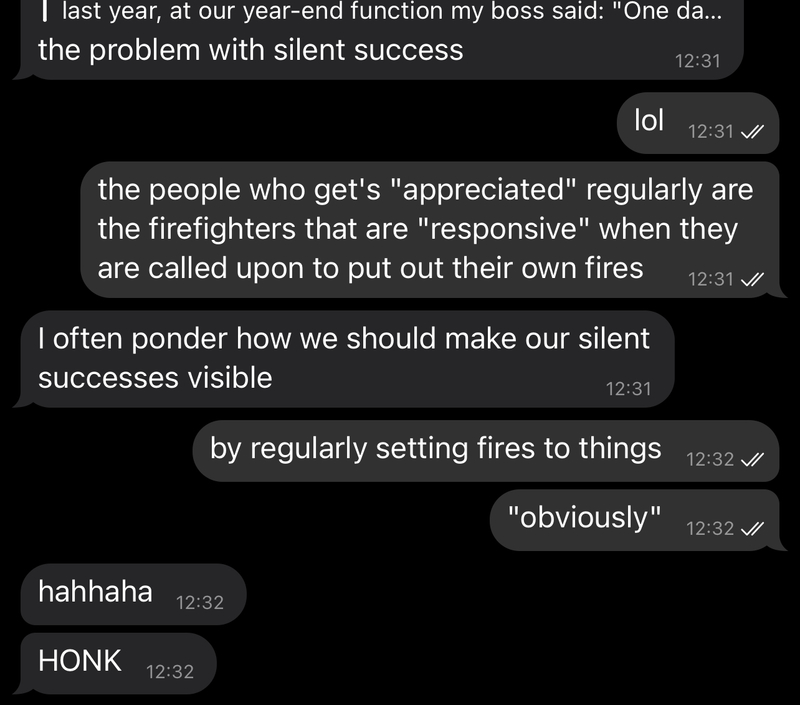 My talk will be about Hashicorp's nomad, a job schedule.

Here are my conference slides for future posterity.

I'm adding a link to the source code of the slides on here too.

Seriously. Please give the slides a look so what I'm about to say makes sense, it'll take you 2 seconds. The link takes you to a single-page html/javascript app that I use whenever I have to present ideas to groups of people. I run that code on my laptop and connect an HDMI for the overhead projector...

I was in a serious technical conversation today and I took an argumentative position that clojure/script is a pragmatic implementation language for real software projects by real developers, engineers and devopses, facing real project deadlines. My basic argument is that if you use clojure/script, you need fewer lines of code to achieve a specific result than you'd need if you used some other language. That fewer lines of code means there are fewer things to comprehend or mentalise while you are busy doing maintenance work on that code. Also, fewer lines of code, means fewer logical places where things can go wrong.

The counter argument is that syntax sometimes aids in readability. I don't know about that, to be honest. If you can get by without syntax, then you're left with the meaning behind the code. And if you express the meaning meaningfully, then you get a piece of code that's a delight to work with.

(PS/rant - I hate traditional slide-deck software. I'd rather edit a piece of code to build my slide content than dick around with a mouse and icons I can barely see.)

After reading this article.

You got the kind of control you wanted. That’s to say where you had a loving relationship with the world, but you didn’t have to make up your mind as to what is should do. You let it decide.

Alan Watts – Master of Control on the youtubes.

Yesterday my friend and colleague Husayn had to write Yoda on the whiteboard in the office and he spelled it with a J, like in Joda. He is from Cameroon. As a group of engineers, we realized Husayn has never seen any of the Star Wars movies.

Later this led to a conversation about the book and the story of Lord of the Rings by J.R.R Tolkien, the other nerd classic and I asked whether he’s read any of those books. He hasn’t, despite being a voracious consumer of books.

I tried to relate how The Hero’s Journey relates to Frodo (and to us) by pointing out how our current situation on the path to The Release of Software into PROD looks exactly like the scene in The Lord of the Rings where Frodo and Sam are getting into the whole Spider thing in the middle section of the story.

This is what Wikipedia has to say about the book. I’m pasting/editing it here, because I believe it to be material.

The Lord of the Rings

From Wikipedia., the free encyclopedia

This article is about the novel.

The title of the novel refers to the story’s main antagonist, the Dark Lord Sauron, who had in an earlier age created the One Ring to rule the other Rings of Power as the ultimate weapon in his campaign to conquer and rule all of Middle-earth. From quiet beginnings in the Shire, a hobbit land not unlike the English countryside, the story ranges across Middle-earth, following the course of the War of the Ring through the eyes of its characters, not only the hobbits Frodo Baggins, Samwise “Sam” Gamgee, Meriadoc “Merry” Brandybuck and Peregrin “Pippin” Took, but also the hobbits’ chief allies and travelling companions: the Men Aragorn son of Arathorn, a Ranger of the North, and Boromir, a Captain of Gondor; Gimli son of Glóin, a Dwarf warrior; Legolas Greenleaf, an Elven prince; and Gandalf, a Wizard.

The Lord of the Rings has [since] been reprinted numerous times and translated into 38 languages.

Tolkien’s work has been the subject of extensive analysis of its themes and origins. Although a major work in itself, the story was only the last movement of a larger epic Tolkien had worked on since 1917, in a process he described as mythopoeia. Influences on this earlier work, and on the story of The Lord of the Rings, include philology, mythology, religion and the author’s distaste for the effects of industrialization, as well as earlier fantasy works and Tolkien’s experiences in World War I. These inspirations and themes have often been denied by Tolkien himself. The Lord of the Rings in its turn is considered to have had a great effect on modern fantasy; the impact of Tolkien’s works is such that the use of the words “Tolkienian” and “Tolkienesque” have been recorded in the Oxford English Dictionary.

8. THE ORDEAL. Near the middle of the story, the hero enters a central space in the Special World and confronts death or faces his or her greatest fear. Out of the moment of death comes a new life.

Sometimes where you are is in the middle. Where things are difficult, the challenges are many and you’re suffering through the process of discovering new strength in yourself.

Frodo and Sam capture Gollum, who had been following them from Moria. They force him to guide them to Mordor. They find that the Black Gate of Mordor is too well guarded, so instead they travel to a secret way Gollum knows. On the way, they encounter Faramir, who, unlike his brother Boromir, resists the temptation to seize the Ring. He provides Frodo and Sam with food. Gollum — who is torn between his loyalty to Frodo and his desire for the Ring — betrays Frodo by leading him to the great spider Shelob in the tunnels of Cirith Ungol. Frodo falls when pierced by Shelob’s sting. But with the help of Galadriel’s gifts, Sam fights off the spider. Believing Frodo to be dead, Sam takes the Ring in the hope of finishing the quest alone. Orcs find Frodo, and from their words Sam becomes aware that Frodo is yet alive. The Orcs take Frodo’s body, and Sam chases after them, entering Mordor alone.

Sometimes you are being Frodo and Sam.

The Lord Of The Rings Book Cover

We’re hiring for a Core Platform Engineer. We’re going to touch a Billion people with financial services (FinTech) and we need help. 🙂

I’m putting this link up so I’ll read it again in the future. Wisdom hides in these words.